Here is the transcript of Hamid Gharagozloo’s presentation at the USCIRF Weekly Roundtable with Gayle Manchin:

Ms. Zahra Esmaili, who had falsely confessed the murder of her husband, a high-ranking IRGC member who had savagely abused her for decades, in order to protect her daughter who in fact had murdered her father while he was violently beating her mother, was murdered a few days ago. She, along with 16 other prisoners was transferred to the special facility to be hanged. The executioners hanged the 16 other prisoners before her eyes and as a result, she suffered a massive heart attack and passed away. Yet, the shameless prison personnel hanged her lifeless body.

Over the past few days, armed IRGC members have shot to death 8 Baluchis in the southeast province of Baluchistan. Their only crime was smuggling fuel to earn a meager living and escape the abject poverty imposed on them by the regime.

Last week, Basij and IRGC agents abducted the Sunni Imam in Birjand, named Mohammad Hassan Pahlevan. As of yet, his family and followers don’t have any information about his health and whereabouts.
Over the past two months, 33 Baluchis were executed, and over 110 Iranian Kurds were arrested and sentenced to prison.
The oppression of Baha’is continues at an unprecedented rate. Summons to appear before the court, baseless charges, prison sentences, etc. have picked up in recent months. What is alarming is the verdicts by the lower court in Mazandaran, affirmed by the upper court and the court of appeals, regarding the right of property ownership for Baha’is. For the first time, the regime’s judiciary has ruled that Baha’is do not have the right to land/property ownership because of their faith. The affirmation of the lower court’s ruling by higher courts is the foundation to make this a national law.
Another alarming development is the addition of articles 499 and 500 to Volume 5 of the regime’s Penal Code, which enables the regime to brand any group as a cult or sect which is illegal and carries harsh penalties. This is particularly disturbing in the case of Gonabadi Sufis and Baha’is.

#Iran has the highest rate of #executions per capita. In many cases the #deathpenalties are executed after flagrantly unfair trials marred by #torture-tainted confessions. Therefore we call on the 🇪🇺 leadership to condition relations with 🇮🇷 on its observance of human rights. https://t.co/4r4yTYwOhO
View on Twitter 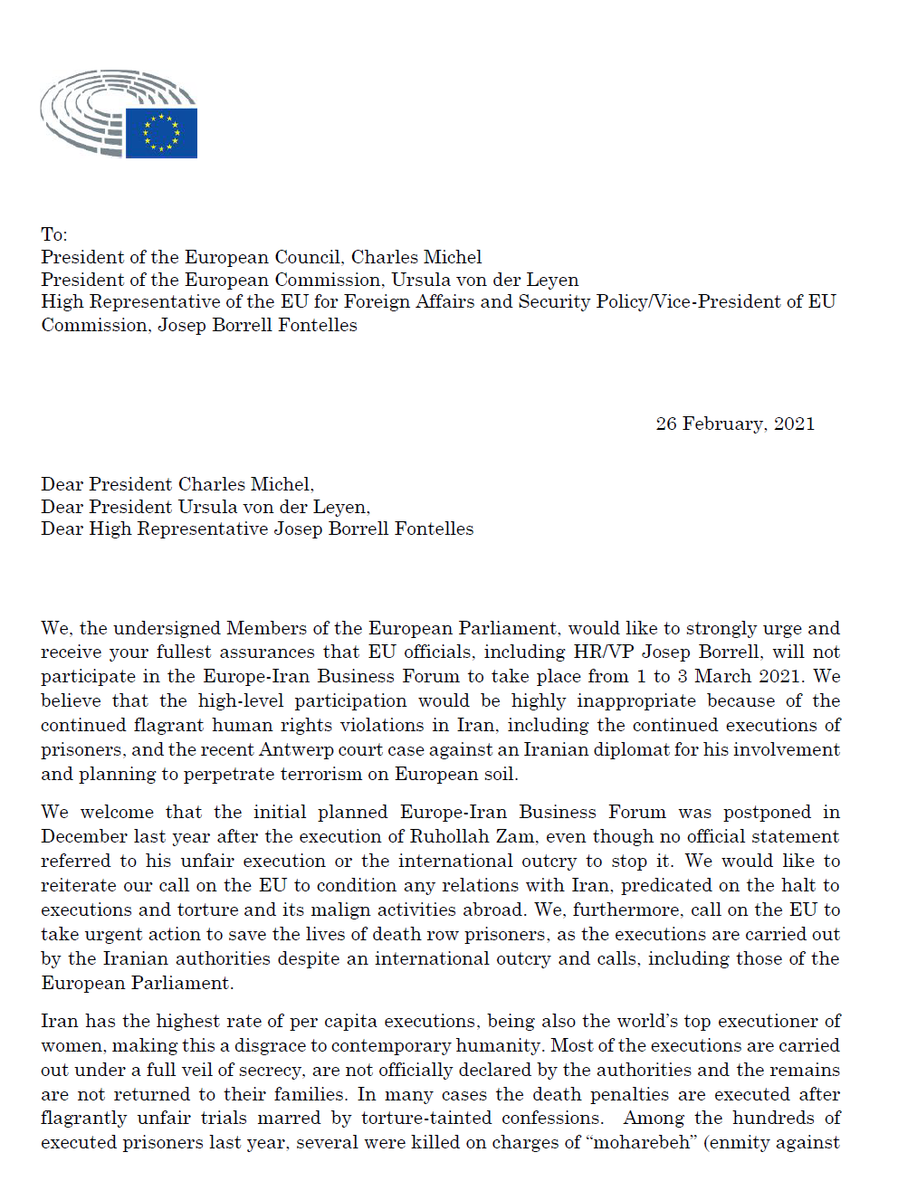 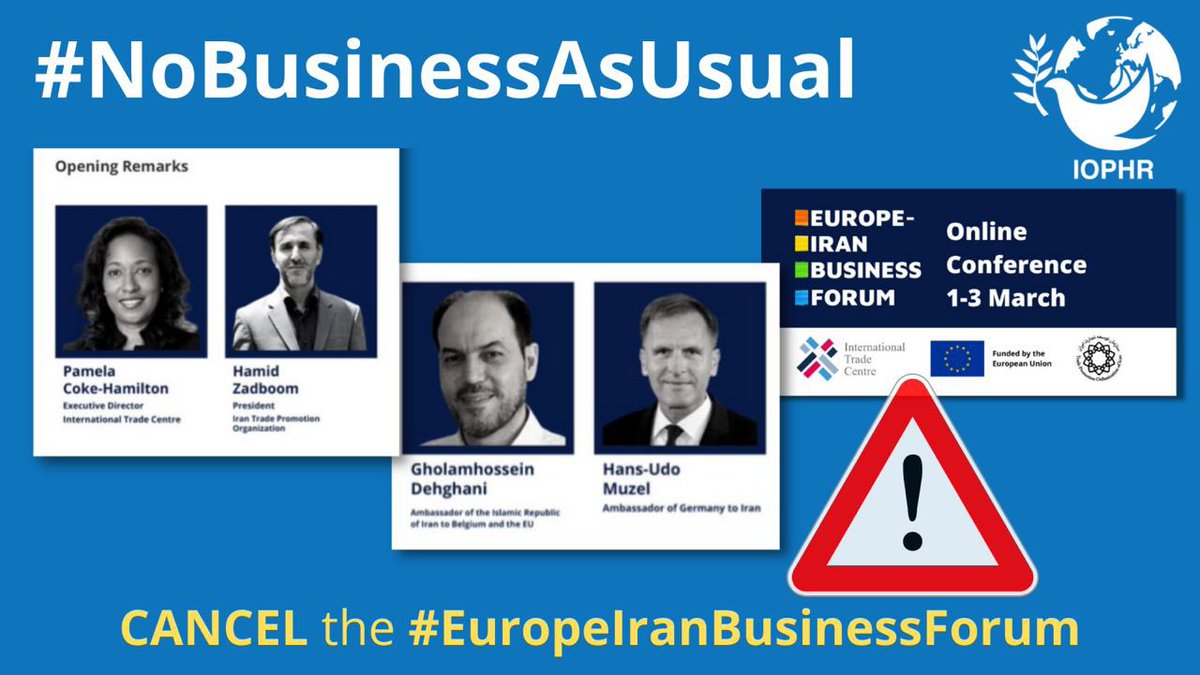 Charlie Weimers MEP 🇸🇪 @weimers
Strongly call for cancellation of @EUIranBizForum next week. Now is not the time! #Iran continues to oppress & execute its own citizens and sponsor terrorism in Mid East & Europe. @JosepBorrellF will you engage or stand up for human rights & Europe’s security? #BoycottMullahs https://t.co/HjwCFgeyWs

🛑IOPHR urges @JosepBorrellF to rethink ALL business relations with #Iran especially #EuropeIranBusinessForum - originally cancelled due to the execution of journalist #RuhollahZam & given severe further deterioration of #HumanRights since Nov!
#NoBusinessAsUsual
#BehnamMahjoubi https://t.co/M1dDI50lRP
View on Twitter 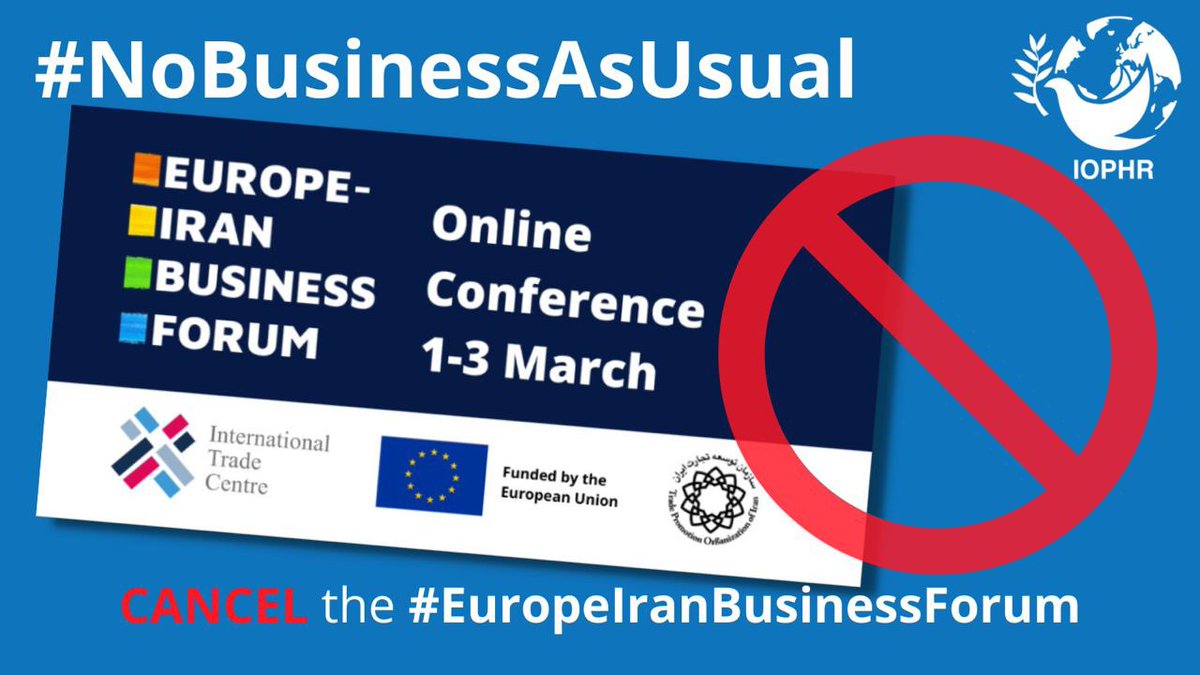 #BREAKING:
The World #Uyghur Congress (WUC) welcomes the passing of a motion in the #Dutch House of Representatives, by a cross-party majority, that recognizes #China’s abuses against the Uyghur people in East Turkistan as a #genocide.
#HumanRights

USCIRF Chair @g_manchin: "Behnam Mahjoubi’s death is an abysmal violation of religious freedom by #Iran’s government and a stark reminder of its egregious and ongoing persecution of the country’s Gonabadi Sufi community." (1/2) https://t.co/hRsg56zO3E
View on Twitter
8
0
Share This