IOPHR statement in relation to the execution of Mr. Mostafa Salehi, a 30-year-old Iranian citizen.

Unfortunately, despite the repeated and numerous requests of all Iranians, human rights organizations and groups, yet another Iranian citizen, the 30 year old Mr. Mostafa Salehi, was executed by the Iranian regime on the 5th August 2020. Mr Salehi’s only crime was to take part in the December 2016/ January 2017 peaceful protest against the 300% increase in the price of gasoline in Esfahan province.

It is noteworthy that the regime only charged Mr Salehi with the charge of murder, after his arrest in order to justify his execution! None of which they could prove, or even show that he actually possessed any firearms, ammunition, or any weapon, at the time of his arrest by the police.

In this regard, the IOPHR would like to draw the attention of the international community to the absolute disregard of even the bare minimum legal criteria, both in form and content, during Mr Salehi’s legal trail, and handling of his case.

According to the video confession of the judicial authorities (the file of which has also been published) Mr. Salehi had been subjected to all kinds of severe torture for more than a year, in order to force him to sign a confession to the crimes alleged by the Iranian regime, which he repeatedly refused to do. According to the same video statement, Mr Salehi in accordance with his legal right, on a number of occasions requested the footage of his interrogations to be presented in his legal hearings, all of which were blatantly ignored by the court.

All these points, along with other undeniable details, such as the fact that security officials were unable to produce documented evidence of the use of any form of firearms or weapons, nor to present any evidence or testimony in court, to substantiate the allegations against Mr Salehi, all points to the illegality of the trial, its judgment, and the unlawful execution of Mr Salehi.

All these are further signs of vulnerability of the Iranian regime, which finds itself on the verge of inevitable overthrow. Thus, it is desperately trying to spread waves of fear, and terror among the society. Especially, amongst the Iranian youth, by executing the innocent, Mr Salehi, in the hope they can stop any type of attempt by Iranians to demand, and pursue their legal rights!

Based on the available evidence, the IOPHR notes that the execution of Mr. Mostafa Salehi is another in a series of heinous acts by the authorities of the ruling regime in Iran in order to implement the hated policy of “Al-Nasr Bel-Ro’b”, or fearmongering. All in a desperate attempt to stay in power for few more days.

The IOPHR also would like to draw the attention of all governments, international human rights organisations, as well as the world public opinion, to the fact that the Iranian regime has always had the highest execution rate in the world per capita over the past 40 years. As a result, the Iranian citizens have been the largest victims of organised governmental campaign of violence against its own citizens anywhere in the world.

Given this point, and the fact that the ruling regime in Iran has not been properly committed to its obligations, as stated by the Iranian constitution, nor to its international responsibility for world peace and security, it is clear that such an irresponsible system lacks the necessary legitimacy to represent the Iranian people, both domestically, and internationally.  Therefore, the continued survival of such a brutal unjust regime, is both to the detriment of the Iranian citizens, and world peace and security; as it clearly lacks international legitimacy!

Consequently, the IOPHR asks for the suspension of all economic and political relations of all governments, especially EU member states, with the Iranian regime. Moreover, IOPHR asks these international bodies to increase their pressure on the Iranian regime, and push for national free referendum in Iran under the auspices of international observers, like the United Nations, and the European Union.

Necessity of #HumanRights as a Key Component of US 🇺🇸 Negotiations with #Iran 🇮🇷.

The Iran Working Group at the US Office of International Religious Freedom urges President Biden @POTUS & his administration:
https://t.co/ddgHVlOcCM

Joe Rogan: If Iran ‘can kill Navid Afkari' they would 'kill anybody' - The Jerusalem Post https://t.co/Aacd5xKjbM
View on Twitter
9
18
IOPHR @IOPHRpress

A public statement by @GruebelMdb, commemorating 40th day since the murder of #BehnamMahjoubi, a Gonabadi Sufi who was unjustly imprisoned. Mr. Grübel called upon #Iran to end the persecution of #Bahais #Sufis, and all other religious groups. 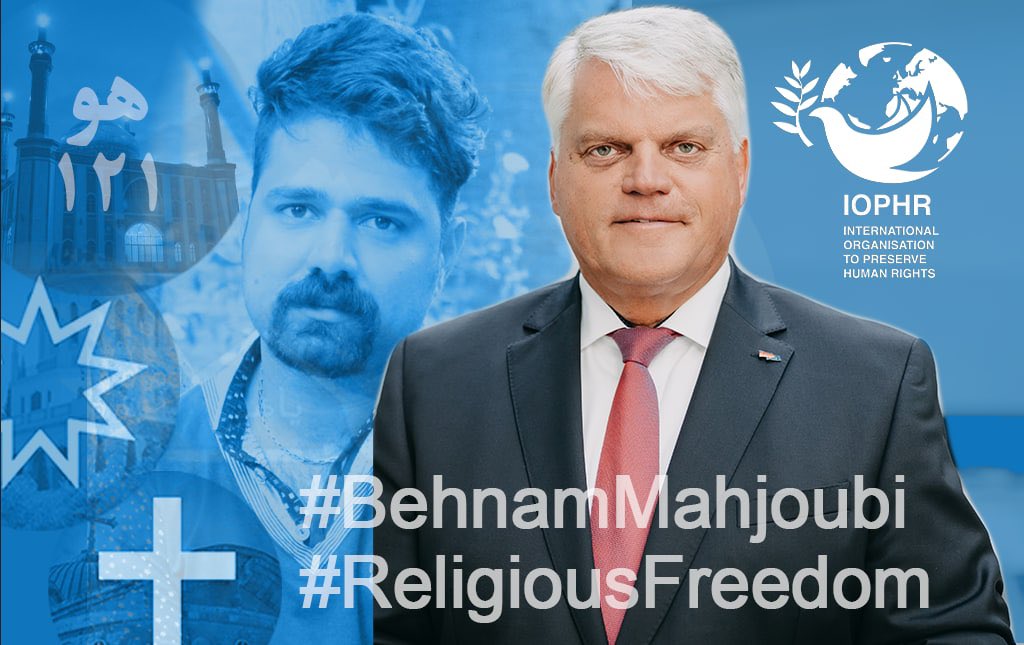